Today, 95% of EMI/EMC engineering is carried out by measurements in a laboratory environment after a prototype is available. Why is simulation harder for EMI/EMC, whereas it is effectively used worldwide in mainstream Signal Integrity or Power Integrity applications? The answer may be hidden in the following challenges encountered in EMI/EMC simulation:

• Lack of IC models for EMI/EMC: Although EMI/EMC is a system-level problem, the performance of the IC is critical to be captured to predict a Pass/Fail situation. In case of emissions (CE and RE), the IC emits the noise which causes the failure. In case of immunity (CI and RI), the IC is a victim of noise that reaches the IC pin to make it fail. Therefore it is critical to capture the EMI/EMC behavior of IC in a model.

• Compute time and memory requirements: EMI/EMC simulations are really chamber-level simulations, where DUT, cable, LISN, antenna and other equipment contribute to the final result. Compare this with Signal and Power integrity where the simulation needs to be performed at the PCB level and cropping geometries of interest are also practiced to reduce computational time and memory bottlenecks. To address these issues, Compliance-scope harnesses the following technological breakthroughs:

So what are your thoughts on using EMC simulation for reference board designs?
Do let us know your ... thoughts in the comments below!
https://simyog.com/emc-simulation-ic-reference-design-boards-part-2/

Compliance-Scope® is a Virtual EMI/EMC laboratory where designers can validate and improve their hardware at an early stage by uploading their design files. The tool also provides diagnosis and suggestions for low-cost fixes at the Printed Circuit Board level.

The primary challenge in the IC-model standard, as defined by IEC-62433 series, is its dependence on the operating conditions of the IC. For example, for a DC-DC converter IC, the IA is dependent on several parameters e.g. switching frequency (fs), load current (Iload) etc.

Hence IA obtained by such methods cannot be used when these conditions change, without a refreshed set of measurements or simulations. An example of the change in the frequency domain spectrum of IA for a small change in switching frequency from 100KHz to 125KHz is shown below: 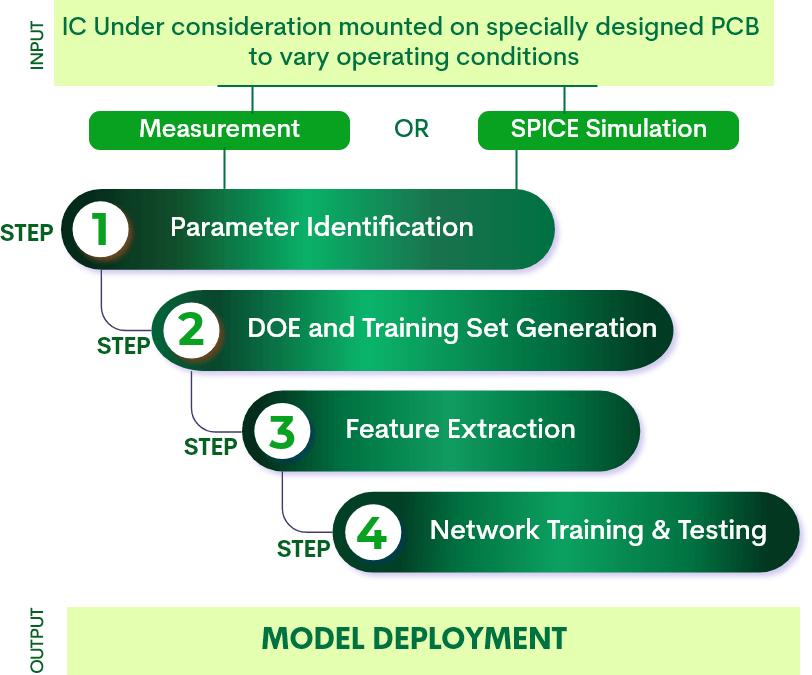 The methodology involves acquiring measurements or simulation data over several different PCB layout variations and operating conditions settings for the IC, referred to here as parameters.

Some equipment corresponding to the laboratory repeat for different DUTs. For example, the same F-140 injection clamp may be used for Bulk Current Injection characterization of hundreds of DUTs. Same for antennas and EMI receivers. We have built data-based models to capture the effect of this equipment.

Similar data models can be generated for antennas, LISN and EMI-receivers. By modeling some equipment using data models, the computational complexity of the physics-based Electromagnetic simulation can be reduced. 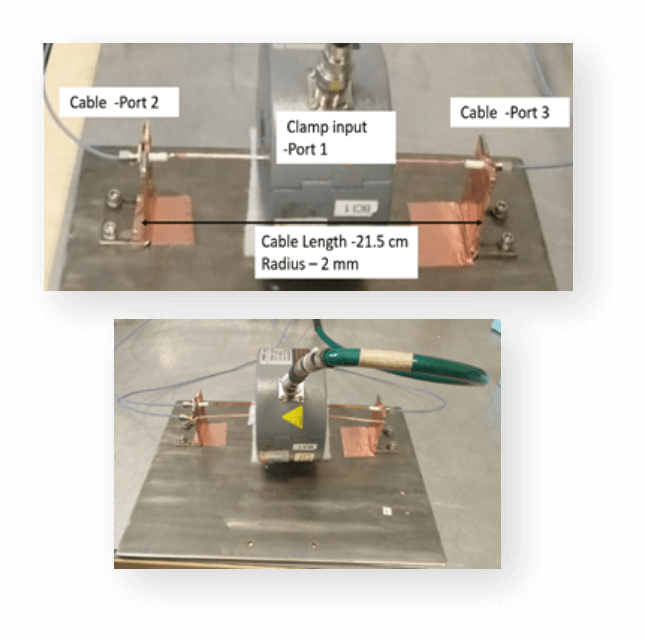 The primary motivation behind using hybrid solvers is to reduce the complexity handled by the 3D full-wave solver or in other words reducing the number of mesh elements for the 3D full-wave solution, while preserving accuracy. Although, hybrid solver technology has been around for decades including solver-on-demand options offered by various tool providers, all the above require user intervention to decide which solver to use on which section of geometry.

The Compliance-Scope® approach is based on a large number of experiments carried out for EMI/EMC simulation. A general-purpose 3D solver is expected to give accurate results for any form of test structure, e.g. airplane to nano-particle. Under such situations, automatic solve choice decisions are hard to make. Since Compliance-scope is aimed only for EMI/EMC applications, this becomes a possibility. For example, we have found that for Conducted EMI/EMC (CE and CI), the cable can be modeled with a 2D solver however, for Radiated EMI/EMC (RE and RI) a full-3D meshed representation of the cable is required for accurate results. 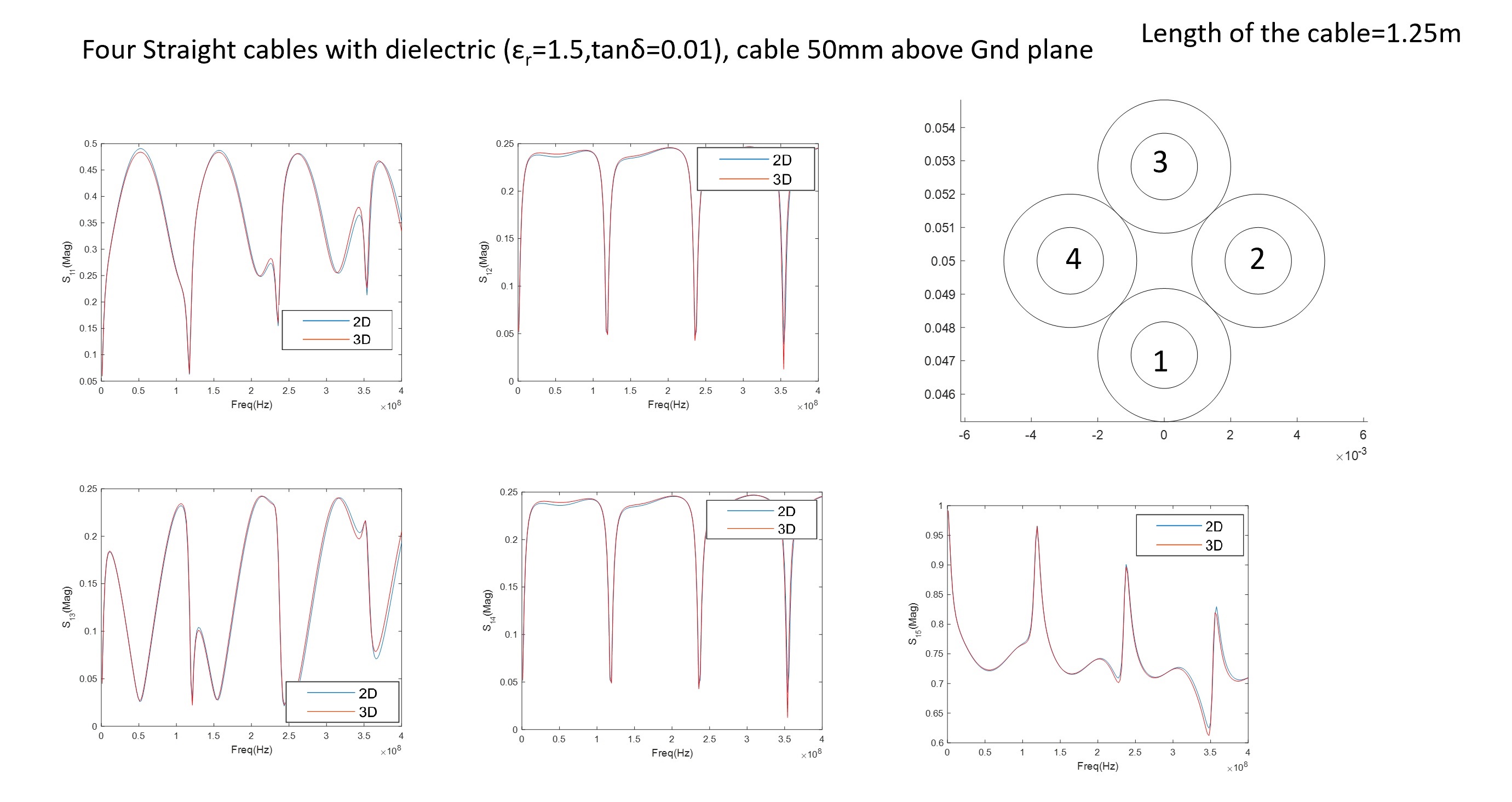 The MTL solver is a popular method to handle structures where the cross-section is invariable across the length of the structure. In such cases, unit r, l, g, c parameters can be extracted using the geometry of the cross-section and they can be utilized to find the S-parameters given the length of the line.
For structures that are amenable to MTL solution, like S-parameter analysis of cables, MTL provides a time and memory-efficient alternative to the full 3D solution, with negligible loss inaccuracy.
Compliance-scope uses an MTL solver for modeling cables (only for conducted tests) in conjunction with 3D MoM solver for the DUT, table, and antenna.

Method of Moments (MoM) also known as Boundary Element Method (BEM) is one of the popular 3D Electromagnetic solvers. It is an Integral Equation (IE) based technique i.e. it works on the integral form of Maxwell’s equation. In a typical MoM solution scheme:
• The structure is discretized into surface-based mesh elements, mostly triangles
• The current and charge density on the structure is computed using the IE form of Maxwell’s Equations.
• Once the current/charge distribution is computed, any parameter of interest like S-parameter or far-field radiation can be computed by simple post-processing.

Compared to Partial Differential Equation (PDE) based techniques, like Finite Difference Time Domain (FDTD) or Finite Element Method (FEM), MoM can converge to the correct result with the lowest number of mesh elements. This gives rise to a much smaller matrix size as compare to FEM or FDTD.

We use a Method of Moments-based 3D full-wave solution. Method of Moments (MoM) is an integral equation-based approach that is known to be more efficient particularly for radiation problems, since only the surfaces of structures need to have meshed – not the whole chamber as in PDE-based methods like Finite Element Method (FEM) or Finite Difference Time Domain (FDTD) Method. In addition, over the last decade, several fast solver approaches have been invented for linear complexity MoM solutions. 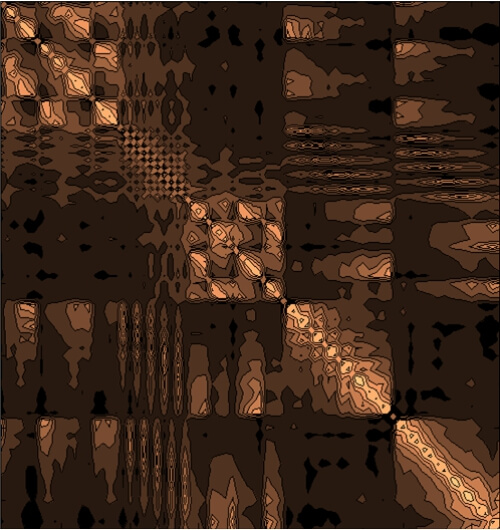 The dielectric formulation of MoM is often a topic of debate. This is because some MoM-based commercial tools in the past have used Multilayered Dielectric Green’s function (2.5D) approximations. While this may work for RF-IC applications or perhaps even in some Signal and Power integrity applications, in EMI/EMC we find that the dielectric needs to be meshed appropriately for correct results, in particular for radiation problems.

Compliance-Scope® is architected for efficient shared memory parallelization so as to take advantage of the multicore hardware roadmap. We are also working with “Intel Startup Program” to efficiently leverage vectorization principles in our software. A technical presentation on the effort as presented in IEEE GEMCCON 2019.
A white paper on the work done by Simyog with Intel Corporation can be found here

Adaptive Frequency Sweep (AFS) is a commonly available feature today in most 3D full-wave solvers. This enables the tool to intelligently select some frequency points and generate the broadband results by interpolation, typically done using Vector-Fitting approach. However, for all such 3D full-wave solvers, the AFS is applied for S-parameter fitting.

In EMI/EMC simulation, the output is typically LISN voltage or Efield data. These are oscillatory is nature and does not lend itself directly to an efficient AFS strategy. On the other hand, due to the peaky nature of results, it is highly advisable to analyze with a small delta-frequency which leads to a very high number of frequency points making AFS a must-have feature.